Match worn/issued Maccabi Haifa 1998/99 long sleeve away shirt, issued to or worn by legendary Israeli striker Alon Mizrahi #11 in the UEFA Cup Winners' Cup Round of 16 first leg match against SV Ried on October 22, 1998 at the Linzer Stadion in Linz. Mizrahi, the captain, played the full match and gave Maccabi Haifa the lead in the 13th minute, but Maccabi Haifa would go on to lose the game 2-1. However, Maccabi won 4-1 in the return leg at home, advancing to the quarter finals of the Cup Winners' Cup - an unprecedented achievement for an Israeli club at the time. This was also the last ever edition of this competition, which was abolished after the 1998/99 season.

Mizrahi joined Maccabi Haifa from his hometown club Bnei Yehuda in 1993, and would go on to score 89 goals in 129 matches in all competitions for Maccabi Haifa - an impressive ratio of 0.69 goals per game. He in fact only played a total of 3 seasons for the club: 1993/94 ("invincibles" league championship and league top scorer), the first half of 1995/96, 1997/98 (State Cup win and league top scorer), and the first half of 1998/99. In the Israeli league, Mizrahi scored a total of 63 goals in 91 matches for Maccabi Haifa (0.69 goals per match), and is the club's 8th-highest league scorer.

Unfortunately, despite being the clubs main goalscorer, Mizrahi decided to leave the club halfway through the season, in the January 1999 transfer window, to join French second division side Nice, finally realizing his dream of playing in Europe. This meant that he did not play in the clubs famous CWC quarter final matches against Lokomotiv Moscow in March 1999, with Maccabi easily eliminated without him. Despite all the goals he scored for the club, many Maccabi Haifa fans remain upset with his mid-season departure, which severely hurt the clubs chances of progressing to the semi-finals.

Mizrahi has a very impressive European record for the club. In 2 of the clubs 3 total participations in the UEFA Cup Winners' Cup, in 1993/94 and 1998/99, he went on to become the competitions top scorer - an unprecedented and unmatched achievement for an Israeli player. In 1993/94, he scored 5 goals in 6 matches and was the joint-top scorer with 3 other players. In 1998/99, with 7 goals in 6 matches, he was the outright top scorer. Together with another 3 goals in 1995/96, he scored an impressive total of 15 goals in 16 European matches - all in the Cup Winners' Cup - and he is ranked #7 in the all-time top scorers list of that competition (joint with 3 other players).

This shirt is historic as this was the first time ever that the club played with last names on the back of the shirt. Interestingly, despite clearly being produced for the European cup matches, for some reason these shirts with last names were also used in several league matches around the period of the European cup games. The white shirt with names on the back was used at least twice in the league, in back-to-back matches in February 1999 - after Mizrahi had already left the club. 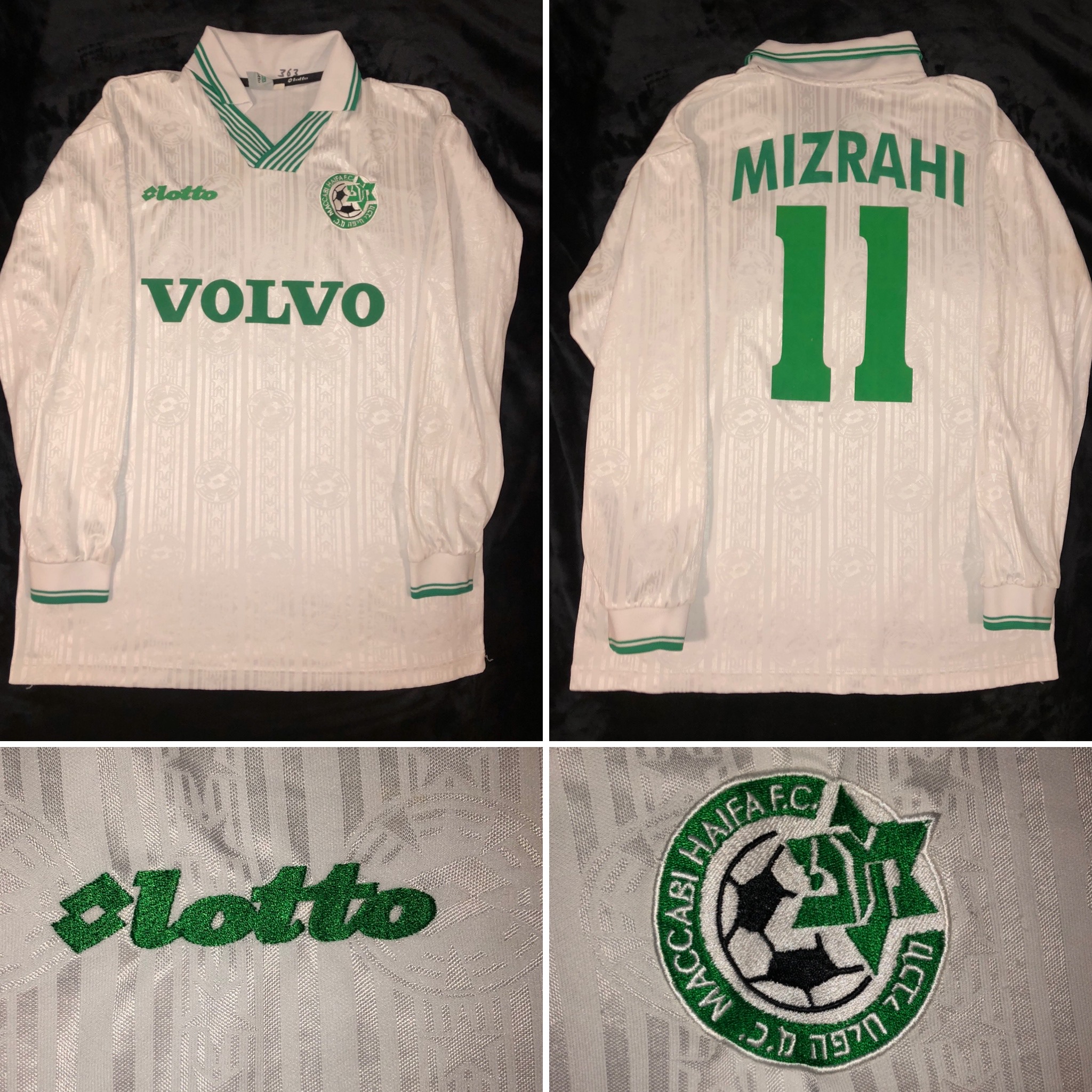